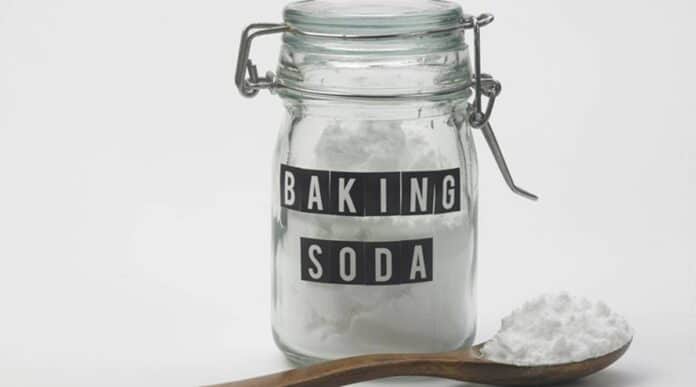 Dogs are affectionate and sweet but sometimes they cause us to be worried sick.  They explore their surroundings via their mouths, meaning they ingest random things.

If the sweet-smelling cleaner appeals to your doggie, she will not hesitate but drink it up.

The next time she will eat something she comes across in your fridge only to realize she has ingested a metal object along with the treat.

Although making a dog vomit is not recommended, from time to time it’s the only thing that can save your dog. This is true if the vet clinic is miles away and the dog needs first aid to expel whatever he’s swallowed.

Among the many things you can use to induce vomiting in your pet, baking soda is quite effective. It is also readily available in many homes.

Here’s a rundown of how to make a dog vomit with baking soda.

Baking soda, or sodium bicarbonate, is a staple in many pantries. From cleaning to removing odors to baking, the leavening agent has multiple uses.

The chemical compound works excellently as a rising agent for biscuits, cakes, cookies, and other baked goods.

It is alkaline which means when it combines with an acid, it produces carbon dioxide gas.

The small CO2 bubbles are trapped in batter causing it to rise.

It is the same principle that plays out when inducing vomiting in your dog with baking soda.

When your pooch takes a few sips of baking soda mixed with water, the alkaline compound will react with the acids in his stomach causing a buildup of CO2 gas.

As the gas buildup increases, the stomach will expand to a point that it will expel what is on the GI tract.

How to Induce Vomiting With Baking Soda

Now that you know why baking soda triggers vomiting, how do you use it on your dog? Check the guide below.

Mix one cup of water and one teaspoon of baking soda.

The dosage depends on the size and breed of the dog but you can get away with one teaspoon of soda in one cup of water.

Mix the soda until well dissolved in the water.

Put on your gloves, grab your dog, and position him right.

You might need a second person to hold the dog as you feed the mixture to the dog.

Now, feed the baking soda solution to the dog sip by sip until the dog vomits.

Stay with the dog as he vomits. When the dog throws up, don’t leave his side just yet.

Stick around until he finishes his business. This helps him to calm down and hopefully get rid of whatever is stuck in her gut.

Besides, we all know that our pups aren’t choosy and sometimes eat everything they regurgitate. This may undo all the procedures you’ve taken him through to vomit.

Once he is done vomiting, inspect if the vomit bears the object.

If not, you might want to go to the hospital for further assistance.

As a safety precaution, always go to the pet clinic after you induce vomiting just to check if your doggie is okay. The whole process can cause physical and emotional trauma.

Stop if nothing happens after one trial. Too much baking soda is toxic to your dog.

If he doesn’t vomit 20 minutes after giving the baking soda mixture, stop the exercise altogether and bring the dog to the vet.

Before using baking soda to trigger vomiting in your dog, remember that not all situations warrant vomiting in the first place.

For one, only proceed if the pooch swallowed the harmful or toxic substance less than two hours ago.

If you go above the 2-hour mark, the object might have gone all the way to the small or large intestines.

Getting it back via the mouth will be a challenge. You can tell it’s been more than two hours if the dog shows symptoms of illness.

Again, if the dog is already showing signs of poisoning, then it is too late to induce vomiting with baking soda or any other home remedy. Instead, rush the dog to an emergency veterinary clinic so that he can be attended Asap.

Common signs of poisoning that should tell you that it is too late to induce vomiting in your pup include tremors, seizures, difficulty in breathing, elevated heart rate, vomiting, paralysis, inability to swallow, extreme agitation, and coma (passing out).

Additionally, do not attempt to trigger vomiting with baking soda if your dog has a history of seizures, breathing problems, stomach issues, and problems with the throat. Throwing up may cause severe symptoms.

For instance, brachycephalic breeds and those with acquired conditions like laryngeal paralysis and megaoesophagus are prone to respiratory issues, and inducing vomiting can lead to lung infection and aspiration pneumonia issues.

It is highly recommended to induce vomiting in such dogs under the supervision of a vet so that if things don’t pan out well, the dog is in a place where he can receive immediate treatment and care.

Don’t induce vomiting in a dog with swallowing difficulties or those with insufficient gag reflexes.

Such dogs may choke on their vomits in case they throw up and don’t manage to swallow correctly. As a result, vomit may aspirate into the lungs, causing severe pneumonia.

Inducing vomiting in puppies is also not recommended. Puppies are more sensitive to poisons and most antidotes that cause vomiting.

Making them throw up using baking soda or any other home remedy, therefore, can sometimes exacerbate their situations.

So, when a puppy is involved, consider speaking to your local vet before attempting any DIY dog vomiting remedy.

Vomiting is also not recommended if the dog has taken the following types of objects.

A Word of Caution

While baking soda is fast and effective at getting a dog to vomit, you should exercise a lot of care when using it around pets.

The very thing that makes it an excellent rising agent is what can be deadly to a dog.

When you feed the baking soda to the dog, it will release gas and cause an expansion of the stomach.

Unfortunately, too much of it will release potentially harmful gases into the gut causing abnormalities in the electrolytes, muscle spasms, and congestive heart failure.

Some of the obvious signs of baking soda poisoning include tremors, seizures, vomiting, diarrhea, lethargy, shortness of breath, and disorientation.

According to Dog Food Scoop, baking soda is dangerous in large amounts. Your doggie must consume at least one teaspoon per pound of bodyweight for it to show mild toxicity.

Finally, it is important to remember that any method of inducing vomiting in dogs comes with certain side effects.

Some of the side effects to expect when you induce vomiting in your pup using baking soda include damaged stomach linings, bloating, diarrhea, confusion and weakness, ulcers, respiratory stress, prolonged nausea, and vomiting (for more than 45 minutes).

It is because of these side effects that today’s vets are turning to drugs like Apomorphine which are believed to be more reliable and tend to cause less damage to the stomach linings.

Baking soda is a super beneficial thing at home.

Besides absorbing odors and causing batters to rise, it can also be used to induce vomiting in your dog.

As long as you use one teaspoon of food-grade baking soda in one cup of water and observe the above-discussed precautions, your dog will be fine.

It is certainly worth a try if your dog ingests a harmful or poisonous substance.

Yes, in emergency situations, the importance of getting your pup to vomit outweighs some of the side effects and safety risks of making a dog throw up using baking soda we’ve highlighted herein.

I Gave My Dog Hydrogen Peroxide And He Didn’t Vomit: What Does It Mean?