Home FAQs How Much Apple Can A Dog Eat? 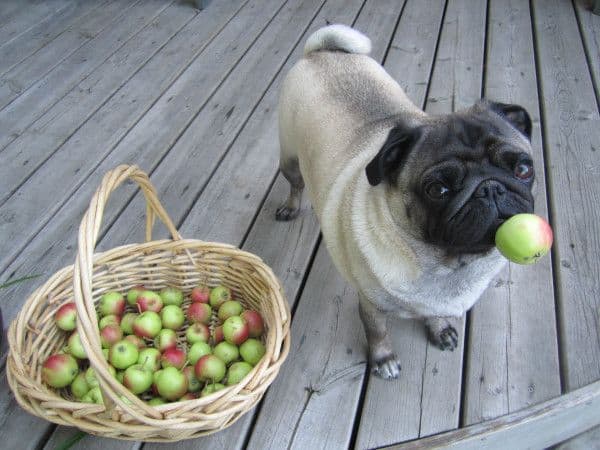 Feeding apples to your dog is a good idea. They are rich in potassium, Vitamins A and C, fiber, and antioxidants.

The antioxidants, potassium, and vitamins will make your dog healthier while the fiber assists in digestion.

Because of their low calories, apples are great treats if you are looking for a treat that will help your furry friend lose or maintain their weight.

The apples can also help clean the teeth as your dog chews on them.

That said, it is still possible for the peels to get lodged in between teeth and you shouldn’t assume that chewing on apples can substitute for dental care.

You should continue your regular schedule of brushing your pet’s teeth as well as visiting the vet for dental cleaning and checkup.

How much apple is too much for a dog?

Your dog will love munching on apples but you shouldn’t allow him to have too much of it.

On average, a slice or two of apples should be enough. Anything above that is too much for your dog to handle.

A full apple has approximately 19 grams of sugar and that is too much sugar for your dog to consume in one snack.

If he eats the entire apple, he might start experiencing stomach aches or even have a case of diarrhea.

Is it bad for a dog to eat a whole apple?

The rule of thumb is to ensure the apple doesn’t constitute more than 10% of the daily calorie intake for your dog. This is why a slice of the apple is enough per day.

If your dog eats an entire apple, he will probably get sick. This is mostly because the fiber content in the apple will be too much for him which will then result in digestive complications that could ultimately lead to diarrhea.

So, if your dog accidentally consumes an entire apple, don’t worry too much about it—the worst-case scenario is the digestive upset but the moment should pass in a couple of hours.

Even though the apple contains some cyanide, one apple doesn’t contain nearly enough of it to cause poisoning.

So, just observe him and be sure to take him to the vet if the symptoms persist.

Can I feed my dog apples every day?

Sure! You can feed your dog an apple every day as long as you do not feed him more than a single slice.

Lots of dogs will enjoy eating the apple, especially if you prepare it with a dog-friendly recipe.

You could bake some thinly sliced apples in the oven until they get nice and crispy. Your dog will love munching on these treats.

On a hot summer day, you can serve them a frozen treat. It’s also okay to mix the apple with other ingredients while making a dog-friendly recipe.

However, remember to only use a single slice of apple a day.

Also, it’s worth noting that dogs are not accustomed to eating fruits—and there is a good chance that his system will not absorb the vitamins and minerals even after safely consuming the apple.

This could be influenced by lots of factors including the breed. And this is why you want to introduce the apples gradually while checking for any reactions or side effects.

If there aren’t any allergic or such reactions, there is no reason to stop feeding them a slice of an apple a day for as the saying goes—an apple a day will keep the vet away.

Can dogs eat the skin of an apple?

Your dog can safely consume the skin of an apple. The skin has lots of fiber which can help in digestion.

However, give it in moderation to avoid any complications.

Also, the skin of an apple could easily get stuck in between the teeth, so you may want to help your dog dislodge the remains by brushing their teeth.

Remember to clean the apple well to make sure you have removed any dirt and pathogens that might cause an infection.

But seeing that there aren’t too many health benefits, you can just peel the apple and feed your dog without any worries.

Preparing the apple for your dog

The following are some crucial preparation steps that are mandatory before serving the apple.

In conclusion, apples are good for dogs but you should serve the apple in moderation.

The apple shouldn’t constitute more than 10% of the dog’s daily calorie intake.

Also, check to make sure you have removed any seeds as they could choke the dog.

You can serve the apple raw but it’s also OK to use it in a dog-friendly recipe.

But whatever you do, make sure not to serve more than one slice of apple.