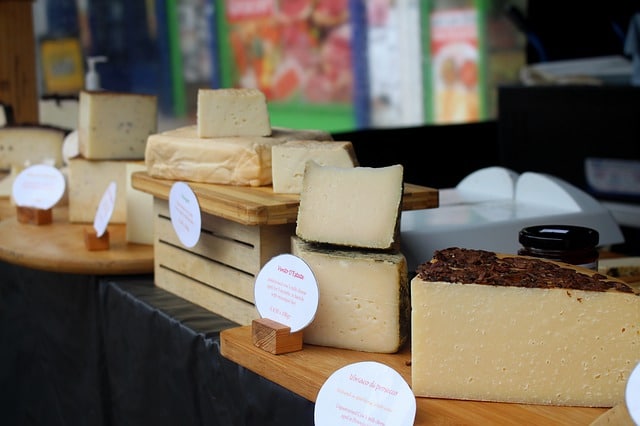 Cheese makes terrific treats for most dogs. That’s why every time you open the cheese packet, your pup will scuttle into the kitchen expecting his share! We love cheese too! It is one of the most used ingredients in fast foods, and we love it for the taste. It also packs many health benefits and we are all aware of them.

There are several types of cheese in the market today and one special and popular variety among them is the Blue Cheese. In particular, it is popular among people with heart problems. If you or your loved one is a heart patient, you probably know one or two things about it.

But what about our canine friends? Is Blue Cheese safe for dogs? We’ll find out shortly but before then…

What is Blue Cheese?

Blue Cheese is a cheese created from cow’s, sheep’s, or goat’s milk but with a distinctive blue, green or grey mold veins running through them. Essentially, the blue-green molds in the veins are bacteria that are starting to age and they are what give the Blue cheese its unique smell and taste.

The bacteria cultures (Penicillium roqueforti to be precise) are added to the cheese through injection—before the formation of the curds or by mixing them after the development of the curd.

Generally, this type of mold is different from typical molds that you may find growing on your forgotten bread. The mold bread produces certain chemicals, mycotoxins, which can cause gastrointestinal problems, damage the kidneys, weaken your immune system, and even cause cancer. On the contrary, molds in blue cheese don’t produce mycotoxins, thanks to their careful processing, making them completely safe for consumption.

There are different types of Blue Cheese, including Gorgonzola, Stilton, Roquefort, and Danablu.

The short answer is: No, blue cheese is not safe for dogs. When the blue cheese is ripening, the bacteria cultures produce a compound called Roquefortine C, which can be toxic to dogs. The substance can cause a wide range of health issues in dogs, including diarrhea, vomiting, seizures, and high temperatures.

The risk of the mentioned symptoms is higher if a dog consumes large quantities of blue cheese. So, while avoiding blue cheese is the best way to ensure that your pup is safe, if he accidentally ingests small quantities of blue cheese, he’ll probably be fine. However, we recommend that you keep a close eye on him for the next few hours and rush him to a vet if you notice any abnormal signs like diarrhea, vomiting, and seizures. Most importantly, don’t try to give your dog any home remedy, induce vomiting, or try to intervene in any way because you could make the situation worse.

Besides the risk of Roquefortine C toxicity, blue cheese is also high in cholesterol—it provides about 5 grams of saturated fat per serving. So, by allowing your dog to consume this variety of cheese, you will be increasing his risks to obesity and pancreatitis. Blue cheese is also high in calories. It is estimated that a single ounce of blue cheese contains 99 calories. If you allow your canine friend to chow down some blue cheese, therefore, you will be exposing him to more calories than you probably intended. Finally, blue cheese has high amounts of sodium—about 391 milligrams—which can also cause a wide range of health complications in dogs.

Other Types of Cheese That Aren’t Safe For Dogs

Apart from blue cheese, you shouldn’t allow your Fido to consume the following types of cheese:

Even though they are delicious to humans, they have the highest levels of saturated fats than any other type of cheese. As such, if your doggie consumes them, he’s likely to suffer from pancreatitis, obesity, and other life-threatening conditions.

2. Cheese with garlic, herbs, and flavorings

Some cheeses like Havarti or cream cheese have added garlic, herbs, and artificial flavorings to boost their flavors. Keep them out of your pup’s reach because some of the additives (like onions and garlic) can be toxic to dogs.

3. Any type of Aged Cheese

Most aged cheeses (cheddar, Swiss, Parmesan, etc) have high levels of tyramine, which is known to inhibit the production of monoamine oxidase (MAO), an enzyme that’s responsible for the breakdown of several neurotransmitters (like serotonin and dopamine). This implies that if your dog is on medication that inhibits MAO and you feed him blue cheese, his body may end up with a lot of these neurotransmitters because they are not being broken down.

While cheese is not poisonous to dogs and is healthy when given in moderation, it is best to avoid some varieties. Steer clear of blue cheese, for instance, because it has Roquefortine C, which can be toxic to dogs. Goat cheese, Brie Cheese, Feta Cheese, any type of aged cheese, and cheese with garlic, herbs, and flavorings are also not safe for your pup.

To help you stay informed and keep your doggie safe, here are more resources on what dogs can and cannot eat: