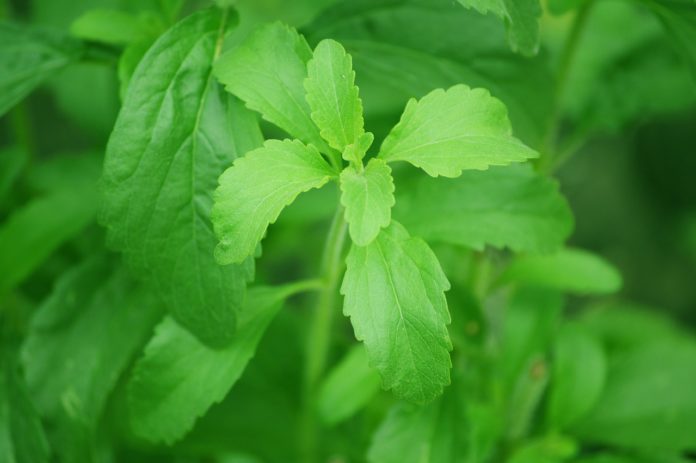 Stevia’s popularity has spiked over the past few years and shows no signs of fading any time soon, thanks to its reputation of being more “natural” than other lab-made artificial sweeteners.

Thirty times sweeter than your typical sugar and with no effect on blood sugar, stevia is now widely available and fast replacing artificial sweeteners in many consumer products globally.

According to the PureCircle Stevia Institute, the plant-derived sweetener is now an ingredient in over 14,000 foods and beverages around the world.

But is stevia a safe addition to your dog food?

Well, let’s find out but before then…

Stevia (sweet leaf or candy leaf) is a herb of the chrysanthemum family, which is a subgroup of Asteraceae family (sunflower family).

It is native to the subtropical and tropical areas of Brazil and Paraguay though it can easily be grown in other countries as well.

Paraguayans have used the herb as a food sweetener for eons while other countries like Brazil, China, Japan, Korea, and South America have shorter—though still relatively long-standing—record of stevia use.

The main compounds that are responsible for the sweetness of this herb are Rebaudioside A and Stevioside.

Rebaudioside A is the sweetest part of the herb and is often extracted and used in stevia-based powders and sweeteners.

Stevioside is the least sweet or bitter part of the plant and it is responsible for the bitter aftertaste that many people hate in stevia.

Interestingly, it packs the most beneficial properties that stevia is famed for.

Is Stevia Safe For Dogs?

The short answer is: Yes, stevia is safe for dogs and that’s why it is used in many dog food products.

It is safer than other natural sugar substitutes like xylitol which are known to be toxic to dogs.

Stevia is considered to be a relatively healthy and better sweetener for dogs for a variety of reasons.

To begin with, it offers similar sweetness to sugar but without the calories. The plant-based sweetener has a glycemic index of 0, which is the lowest value any food ingredient can receive.

Stevia is also all-natural, which means that you can use it in a variety of dog foods without worrying about harsh side effects.

While stevia is safe for dogs, you should use it in moderation.

When consumed in large quantities, the natural sweetener can cause osmotic diarrhea and other digestive side effects in dogs.

Osmotic diarrhea can occur when molecules in stevia draw water from your dog’s body into the colon, resulting in looser feces. This can be a problem if your dog has an ongoing loose stool issue.

Besides, dogs rely on good bacteria and other microorganisms in their guts to help digest the foods that they eat.

A higher dose of sugar beyond what they are used to can upset the balance of such micro-organisms and cause diarrhea.

Why Stevia is a Better Sweetener for Dogs

If you are looking to sweeten your dog’s food, stevia is a better option than typical sugar and other artificial sweeteners for many valid reasons.

As aforementioned, stevia has a glycemic index score of zero (sugar has 63), which implies that it won’t cause blood sugar spikes in your dog after consumption.

Sugar and other artificial sweeteners are high in calories and are known to be major contributors to obesity in dogs.

Stevia has zero calories and has been shown to boost satiety as well.

Additionally, based on past studies, stevia packs many other health benefits that may be beneficial to your dog, including:

I. It may help lower cholesterol levels

A 2010 study published in the International Journal of Obesity found that stevia decreased the amount of bad (or oxidized LDL) cholesterol in mice.

If it affects dogs in a similar manner, stevia could help lower cardiovascular disease risks in your dog.

In a past clinical trial, a control group was given a gram of maize starch with meals (placebo) while another group took a gram of stevioside.

Blood glucose levels in the ‘stevioside’ group dropped by 18% compared to the ‘maize starch placebo group.

III. Other studies have also suggested that stevia may have potent anti-inflammatory properties and could play a critical role in modulating the immune system and warding off cancer.

The Best Type of Stevia to Use in Your Dog Food

Like any other product out there, you should understand that not all stevia-based products are the same.

If you want your four-legged friend to get all the health benefits of stevia, go for the raw, green leaf of the plant.

It contains a host of natural vitamins and minerals, including potassium, calcium, magnesium, zinc, iron, vitamin C, and beta-carotene.

If you cannot get the raw form, there are a few more viable options that you can consider:

These are mostly 100% pure and unprocessed. We recommend this whole stevia leaves from GreenGreenStevia.

These are technically liquid stevia made from the plant leaves.

They may include small amounts of natural flavorings to give them a well-balanced flavor profile.

We recommend this stevia tincture by Sweet Drops.

These are the most common forms of stevia and are made mostly by extraction of the rebaudioside, the sweetest part of the plant.

They go through many steps during processing, including bleaching and slight chemical alterations to balance their flavors, so ensure that you read the label of the product you plan to buy to be sure of how it was processed or the ingredients.

While it is relatively safe for dogs, it may cause diarrhea and other digestive issues when consumed in large quantities.

So, add it to your dog food recipes in moderation. Besides, when buying stevia, read the label to be sure of the ingredients and processing method used in manufacturing the product.

Is Thieves Oil Safe for Dogs? 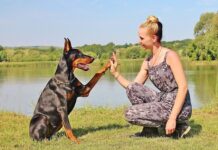