Home FAQs Why Is My Dog Aggressive When I’m On My Period? 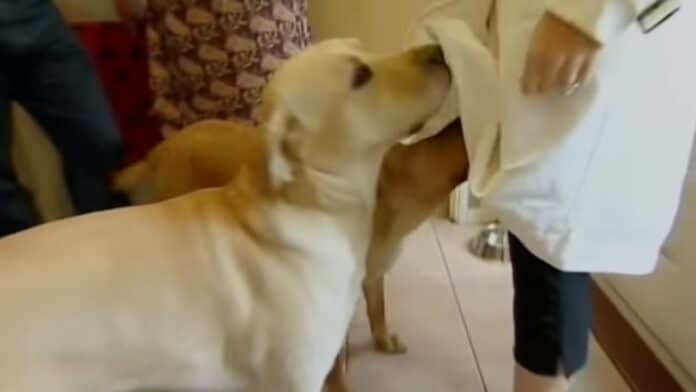 Menstruation is a tough time of the month for many women. From dealing with out-of-whack hormones to cramping to having no appetite (or an increased one), there’s no room for anything more.

So when you have to deal with an aggressive dog on top of everything else, the experience can be debilitating.

But is there a real connection between menstruation and increased aggressive behavior in dogs?

It All Comes Down To the Smell

It comes as no surprise that dogs are beings driven by smell. This is the reason dogs like German shepherds are used extensively in drug-sniffing applications, bed bug exposure, and forensic operations.

Apparently, canines’ noses contain 300 million receptors. Human beings only have 5 million of those.

They can pick up a smell 10,000 times better than us. A pooch literally experiences his world through his nose.

During your period, you might have noticed your pooch hanging around and smelling your crotch area a lot. This is because they can sense the smell and know something is different.

Just think about it: if you can smell blood while on your period with a mere 5 million sense receptors, what about your dog with 300 million? He probably can tell that you are going through something from a mile away.

To elaborate, like other mammals, dogs have apocrine glands which produce chemicals known as pheromones.

We also have these apocrine glands—and ours are also more concentrated on our groins and armpits.

Since your dog may not jump to reach your armpit in most instances, he will sniff your crotch area.

But don’t fret; when your dog circles around you and sniffs out your groin area, it is only for information purposes.

Why Does He Get Aggressive?

In addition to detecting menstruation through your odor, dogs can also sense your hormones. Remember that during your period, your body tends to release pheromones.

The apocrine glands produce hormones that give other dogs information about the dog they are sniffing. By smelling them, they can tell whether their partners are ready to mate or not.

So typically, male dogs smell their female counterparts’ butt to establish whether they are ovulating, pregnant, or in no mood for mating.

Female dogs tend to give off pheromones in the same way humans do during menstruation.

Essentially, a female pup smells differently, almost like you do when you are on your period. As a result, male dogs tend to be very curious when they come across this smell.

Unsurprisingly, he will get aggressive especially when other people approach you. It’s the alpha behavior kicking in to keep other “dogs” away from you during the ovulation season.

In the case of a female dog being aggressive during your menstruation, the answer can be that they feel threatened.

In Kingdom Animalia, older female dogs tend to show aggressive behavior to younger females who are ovulating. This can play out even with their human companions

Do All Breeds Act Weird During Menstruation?

Yes. All dogs are scent-driven and can develop aggressive behavior towards a woman on her period.

However, some breeds tend to be prone to it than others. This boils down to the sense of smell.

Scent hounds including basset hounds and bloodhounds enjoy a stronger smell sense than other dog breeds. As a result, they tend to be very interested in sniffing out a woman’s groin area during her period.

Large dogs are also notorious for smelling women on their menstrual periods. Smaller breeds tend to keep their noses away from you for some reason.

Finally, the smelling tendencies among dogs can be directly proportional to the training received.

Some pups have just been trained to greet people politely regardless of what their noses detect. This means that even though they can tell that something is off, they will play it down and act cool.

On the opposite side of the spectrum, some dogs just can’t pass on an opportunity to explore their world using their greatest organ: the nose.

Related Post: 10 Dogs with the Worst Sense of Smell

Hopefully, now you understand why your dog is aggressive when you are on your periods. And why he may raid the trash can and devour your used sanitary pads or tampons.

The next time your Fido acts weird just because it’s that time of the month, don’t be alarmed.

His sense of smell is throwing him all sorts of signals which make him behave that way.

Most importantly, most dogs won’t mind being around you when you are menstruating.

If anything, some dog breeds are even more skilled at detecting certain health-related conditions in their owners like urinary tract infections, migraines, and even some types of cancerous growths.

Why Does my Dog Groom Me?