Home Breeds Why Are Tibetan Mastiffs So Expensive? 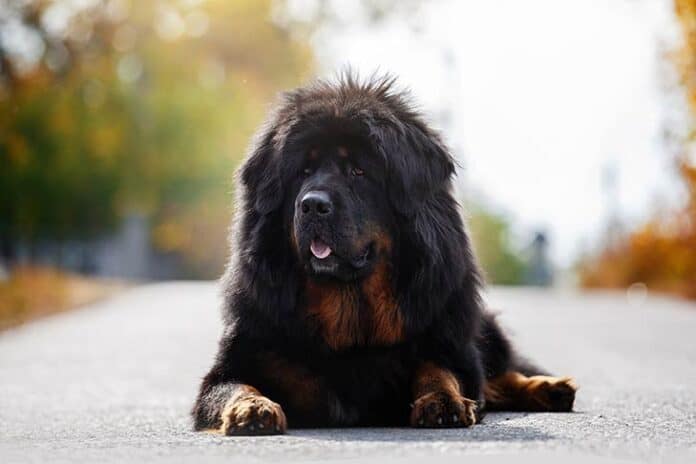 With their lion manes, bushy tails that coil over the back, heavy coats, and majestic presence, these dogs have made their way to the hearts of many.

Originating from Tibet, China, Tibetan mastiffs are built for the cold harsh winter. Their huge bodies have tons of fur.

Just the sight of one will make you want to hug him. Add that to a lion-like appearance and you know that this breed is a sight to behold.

If you know a thing or two about the Tibetan mastiff breed, you’ll confirm that it is one of the most expensive in the world.

Getting one will cost you an arm and a leg. One puppy from a reputable breeder will set you back hundreds of thousands of dollars (if not more).

Over the last decade, we have read reports of Tibetan mastiffs selling for millions of dollars.

But why are these dogs expensive?

How expensive are Tibetan mastiffs?

The most expensive Tibetan mastiff to date was worth $1.9 million.

Others that have hit the headlines include ‘Big Splash’ who was purchased for $1.5 million.

True, these are on the extreme end of the spectrum but they show how expensive this breed is.

Tibetan mastiffs are thought to be the most expensive dogs in the world. One puppy will set you back anywhere from $1500 and $5000 depending on age, pedigree, breeder, availability (or lack thereof) of medical reports, care accorded, immunization, training, and more.

1. They are prestige symbols for the affluent

Perhaps the number one reason Tibetan mastiffs are ridiculously high-priced is because they are symbols of wealth mainly in China.

Those that keep tabs on trending news may recall the story of a Chinese man in 2014 that went all out to display his deep pockets via his dog. The story caught the attention of the entire world.

The property developer made the sale at a luxury dog fair event in China.

This was not the first time a Tibetan mastiff was bought for a pretty penny. Three years prior, another wealthy Chinese man parted with 10 million Yuan ($1.5 million) for Big Splash—an 11-month Tibetan mastiff puppy as well. By then, this was the highest-selling dog.

Clearly, China’s elite are willing to splash millions on their doggies just for show-off.

In other parts of the world, the affluent prefer to spend huge amounts of money on designer outfits, sports cars, and jewelry but China would rather brag on their dogs.

Certainly, this reason alone has pushed the price of this dog above the roof.

While Tibetan mastiffs have been around for thousands of years, they were sort of in the shadows until about five decades ago.

Part of the reason they were closed off from the world is that Tibet is not easily accessible.

Even when these dogs came into the limelight, only a few were in existence.

According to National Geographic, only 5,000 dogs from this breed were registered by the American Kennel Club AKC).

Sadly, only 1000-200 of them are alive today. Their rarity and popularity make them very costly.

Tibetan mastiffs are believed to be the ancestors of the general mastiff family of dogs.

After living in seclusion for thousands of years, they didn’t get to breed with other dogs.

Sure, hungry breeders these days have created mixed Tibetan mastiffs but purebred ones are still around.

These cost way more for the simple fact that they are pedigree animals. Their lion-blood lineage has not been tampered with.

Purebred dogs come with many advantages including stable temperaments, predictable health, and the assurance of good breeding.

On the flip side, these doggies come at a high price point.

The cost of a puppy is determined by many things such as immunizations, type of food offered, vet visits, the popularity of the breed, among other things.

Some puppies are extremely expensive to breed. In the case of ‘Big Splash’, the breeder spoke to Daily Mail saying that the 1.5 million dollar price tag was well worth it.

“We have spent a pretty penny raising the puppy and we have plenty of people who need salaries.” He said.

To begin with, Tibetan mastiffs eat a lot. Even as puppies, they consume high food rations.

Thanks to their powerful bodies, massive size, and watchful nature, Tibetan mastiffs are great protectors.

True, they may appear to be gentle giants to those they love but they can change roles to fierce guard dogs when strangers approach.

A fully-grown male dog from the breed weighs about 90-150 pounds and stands 26-29 inches tall.

And really, this canine doesn’t play when it comes to watching over those he loves.

He is ferocious, brave, and ready to attack if need be. Breeders know this too well and take advantage of it to push the price over the roof.

Dogs with good temperaments sell well in the market. Pet owners are always looking for those that fit well into their lifestyles.

Other breeds such as the Akita may have the looks but they may not be good around kids.

Tibetan mastiffs do not only stand out as far as looks are concerned but they are also some of the warmest dogs to own.

Affectionate, sober, intelligent, loving, accepting, and friendly, members of the breed make for wonderful additions to the family.

As long as they are socialized and trained properly, they can live around kids, other dogs, older folk, you name it.

They are especially great around senior citizens, thanks to their incredible protective skills.

Their intimidating look is enough to ward off any threat. Add that on top of everything else and you know why this breed doesn’t come cheap.

Owning a pet these days is not an easy affair. Unless you want a poorly-raised dog with a bad health report, no lineage tracing, and bad health, you have to shelve cold hard cash for a quality pet.

Tibetan mastiffs are at the top of the chain for reasons listed here.

This is no dog for anyone. Even with money to splurge, you need plenty of space, dedication, a big maintenance budget, and plenty of training to raise a good doggie.

Still, it is worth your money every bit.