Home Tips & Tricks How to Tell How Long a Tick Has Been Attached To a... 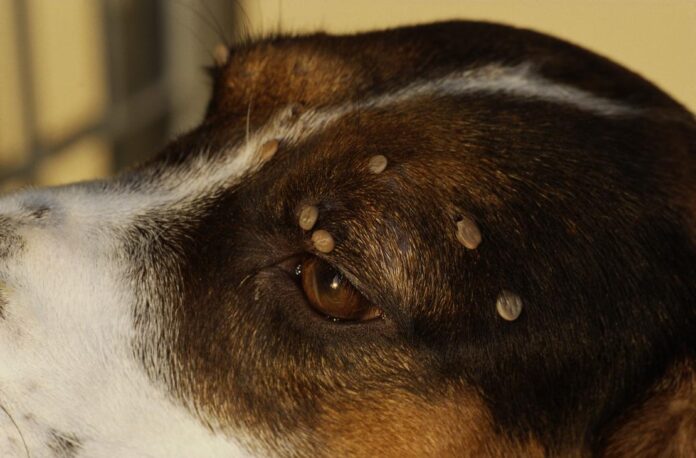 Most biting bugs are known for biting and bailing in a jiffy. On the other hand, ticks will bite and remain attached for a long time because they need to feed on blood for several days.

It’s a blessing in disguise because it is easy to know if your dog has a tick infestation—you will find the ticks attached to the skin of your dog.

A tick will typically feed for around 10 days after which it will detach itself from your pet.

But how exactly can you tell how long a tick has been attached to your dog?

Before you can tell how long a tick has been attached to your pup, it is important to be sure that it is really a tick that you are dealing with. So, what do ticks on dogs look like?

Well, when they have not fed, ticks can be about the size of an apple seed and are usually brownish though color can vary depending on the species of the tick.

If they are embedded into a dog’s skin, they tend to look like dark skin tags or raised moles.

However, it is easy to confuse them with small bumps on your pup’s skin. To be certain, look closely for telltale signs that it is really a tick such as oval, hard body, and presence of eight legs.

Again, it is important to remember that the tick’s head is the only part that it burrows into your dog’s body.

So, a bump that appears under your dog’s skin may not be a tick.

But if you see something that seems to be sticking out of your pup’s skin, there are high chances that it is a tick.

Consider taking a closer look with a magnifying glass to be sure.

After feeding on your dog’s blood, ticks become ‘engorged’. At this stage, they can grow to more than 1 cm in size.

If you are still confused, don’t fret. Not all ticks are similar in terms of appearance—they vary throughout their lifecycle (In fact, engorged ticks can be a challenge to identify).

If you are not sure whether or not what’s on your dog’s skin is a tick, feel free to consult with your vet.

Telling how long a tick has been attached to your dog is a bit tricky but possible.

Since a tick needs at least 36 hours of feeding to be engorged, an engorged tick indicates that it has been attached to your dog for at least 2 days.

However, the tick can still remain attached to the dog for up to 10 days, so it is safe to assume that an engorged tick has been attached for 2 to 10 days.

If the tick is not yet engorged, then it means it attached recently—possibly just a couple of hours.

So, once you see a tick on your dog, examine it to see if it’s engorged or not and that will tell you how long it has been attached.

How long a tick stays attached will depend on several factors including the species of the tick, the life stage of the tick, and how the host responds to the tick bite.

If a tick attaches and is left undisturbed, it will remain on its host for 3-7 days depending on the stage it is at in its life cycle.

The larvae of the tick will attach for 3 days, the nymphs for 4 days, and an adult (female) tick will remain attached for 7-10 days.

However, these are just averages and they can fluctuate depending on the species. For instance, a deer tick feeds faster by almost a day than American dog ticks.

If your dog has strong immunity, the ticks will find it hard to stay attached for too long.

Previous sensitization to certain proteins found in the tick saliva might affect the ability of a tick to ingest blood.

In some cases, this makes them stay attached for a bit longer but for the most part, it makes the host itch more.

This itching forces the dog to scratch more which can result in the ticks falling off sooner than usual.

The Dangers Ticks Pose To Your Dog: A Quick Overview

Ticks attach to your dog to feed on their blood. When that happens, the dog can suffer from tick-borne infections.

The risk of your pet contracting the disease will depend on several factors including the season, your geographical location, what type of tick it is, and how long it was attached.

If the tick has been attached to the pet long enough to feed on the blood of your pet, then there is a very high risk of a tick-borne disease.

You can tell that a tick has fed on the blood of your dog if it is engorged. If it is not engorged, then there is a very low risk of infection.

Most ticks feed for more than 36 hours before they can transmit the spirochete. This means that the presence of a tick bite doesn’t necessarily mean your pet has been infected.

What you need to know is how long the tick was attached to your pet and then you can know for sure.

Lyme disease is caused by an organism known as Borrelia burgdorferi.

This organism stays inactive in the tick’s midgut and only becomes active after it has been exposed to a meal of warm blood.

After it becomes active, the organism gets into the salivary glands of the tick and that is when the tick transmits the infectious parasite to its host.

As the tick sucks blood from the host, it occasionally gets rid of the excess saliva and so the tick will literally salivate the disease-causing organism into the host.

How Long Does It Take For A Tick To Infect A Dog?

How long a tick takes to infect your pup will be determined by two main factors: if the tick had fed and the species of the tick.

If the tick had recently fed, it can transmit disease-causing bacteria to your dog in around 10 minutes.

However, if the tick hadn’t fed, it might take approximately 10 hours for the transmission to occur.

Additionally, the timeline can be affected by the species because different tick species prepare to feed differently.

For some species, 10 minutes is all they need to finish preparing and start feeding.

Other species might take up to 2 hours to comfortably latch and be ready to feed.

So, depending on this set of circumstances, a tick will take anything from 10 minutes to 10 hours to infect your dog.

How Long Does A Tick Have To Be Attached To A Dog To Transmit Disease?

In most cases and according to the CDC, a tick has to be attached to the dog for anything from 36-48 hours before the Lyme disease is transmitted to the dog.

But this is not ALWAYS true—no one can tell precisely how long a tick has to be attached to a dog to transmit diseases. In other words, there is no KNOWN/PROVEN minimum attachment time.

So, it is risky to assume that your dog will not contract diseases if the tick has been attached on him for less than 24 hours.

What is certain is the fact that the longer a tick is attached to a dog, the more likely it is able to transmit diseases.

Generally, a tick usually latches on the dog in approximately 10 minutes although it can take a couple of hours for some tick species.

The tick then secretes some minute amounts of saliva that have anesthetic properties to prevent the dog from realizing that they have a parasite.

The disease-causing pathogens in the tick are therefore passed to the host animal in this way (through its saliva).

Also, as the tick feeds on the blood, it will ingest any pathogens that might be in the blood of its host.

This way, the tick can pick disease-causing pathogens from one animal and transmit them to the next.

How Long Does It Take For A Tick To Fall Off A Dog?

Most ticks produce a cement-like material that helps them to latch firmly on their host.

This prevents them from falling during feeding or if rubbed with the tail, tongues, or paws of your dog.

The tick will feed slowly for a couple of days and will then detach and fall off after they are engorged.

Depending on their rate of feeding and species of the tick, this process can take anything from a couple of days to 2 weeks and it could easily happen without you or your dog noticing.

However, If you notice ticks attached to your dog, you should detach them immediately to avoid the contraction of diseases.

Check the following posts for ideas on how to remove ticks from your pup’s skin:

How to Remove a Tick from a Dog with Vaseline

How to Remove Tick from a Dog with Alcohol

How To Get A Tick Off A Dog With Dish Soap

How Long Does A Tick Live?

The lifecycle of a tick has four stages: egg, larva, nymph, and adult.

The larva and nymphs of a tick rely on blood meal to mold and grow to the next stages. Once they have reached the adult stage, the female ticks need the blood meal to lay eggs.

The male adult ticks require very little blood and they only attach themselves to your dog (or other animals) to feed the female ticks.

A tick typically detaches from a host at every stage of the lifecycle, which means they will need to find at least 3 hosts to complete their life cycle.

The life cycle of a tick typically completes in a year although environmental factors can influence the time.

If the climatic conditions are not favorable, the development process is delayed which can extend the time needed to complete the life cycle by an additional 2 years.

Once you notice a tick attached to your dog, you should deal with the issue right away.

There is a small window that you can take advantage of to avoid having to deal with tick-borne diseases.

It would be a good idea to have a vet check your dog just to be on the safe side.

Identifying where the dog got the ticks would also be a good way of avoiding future infestations.

Try to trace your steps to the last place your dog visited and try to avoid it if possible.