Home Tips & Tricks How to Get Rid Of Botflies in Dogs 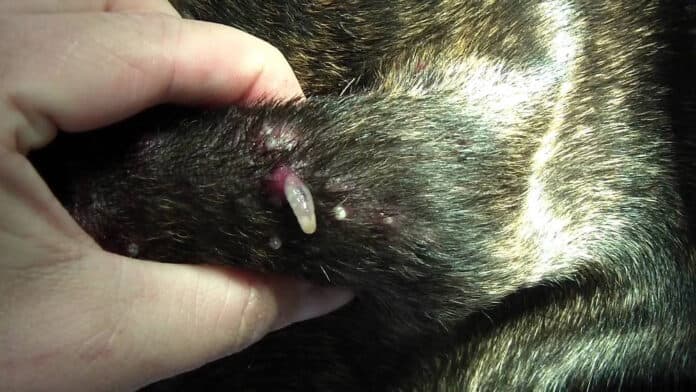 Like other flies, botflies cause havoc in a dog’s life. For one, they trigger a host of symptoms in the pooch including lethargy, itching, vomiting, and loss of appetite.

Most importantly, an infestation causes an infection that causes more damage to the dog.

Most pups develop an abscess or infection on the skin even after the fly has left their body.

As they travel through the dog’s body, botfly larvae cause inflammation in their paths.

Affected areas include the brain, eyes and surrounding tissues, trachea, the nose, and the larynx.

If you notice your doggie showing symptoms of a botfly infestation, you need to act fast. Her chances of suffering an infection and widespread disease depend on action from your side.

In this guide, we explain proven techniques of removing a botfly in a dog.

Also called Cuterebra, botflies are parasites that burrow themselves in the tissues of animal hosts.

They hunt in their larvae stage from where they may also be referred to as ‘maggots’ or warbles.

For the most part, botflies hunt rabbits and other rodents. However, if a dog or cat comes across their paths, they will put up shop in their tissues as well.

Botflies are common in the United States, Mexico, and South America, especially during summer and fall.

There are approximately 26 species of Cuterebra with the main ones including C. fontinella and C. horripilum.

How Do Dogs Get Botfly?

There are many ways dogs get botfly infestations. Primarily, they pick the parasites up when playing in rodent holes.

Adult botflies lay and deposit their eggs in the openings of rabbit holes or somewhere in the vicinity.  As the dog hunts rabbits in their holes, they will get infected.

After hatching, the larvae will climb on the host’s body and find an orifice (mouth, ear, nose, skin wounds, or nether regions).

After a couple of days, they travel through the dog’s internal tissue and embed beneath the dog’s skin.

There, they will form cysts and keep their life cycles going.

As the embedded larva matures into an adult, it will lay more eggs and then drop out of the host’s body through the air opening.

While most doggies catch a botfly infestation when playing near rodent holes, others get it when hanging out in grass containing botfly eggs.

Maggots can lay their eggs in blades of grass. When your pooch rolls around and moves in the grass, the parasite will crawl into her body and look for the nearest opening to enter through.

Although rare, dogs can get infected when another pet brings the parasite home.

If you have a rabbit, cat, or another dog, they may throw Cuterebra eggs around. These may fall on bedding, sofa, and the floor ultimately infecting your poor dog.

How to Get Rid of a Botfly in a Dog

Now to the ways of removing botfly in your dog…

Vaseline does wonders when you are trying to get rid of Cuterebra from your dog’s body.

Petroleum jelly, in general, is very handy when suffocating flies of all kinds.

It can be used to eliminate ticks, fleas, and several types of flies from animals and human beings.

Before burrowing their little bodies in a dog’s skin, botflies will pierce through it to create an air hole. This is where Vaseline comes in handy.

When applied to the infected area, it seals the hole and cuts off the oxygen supply.

Everything about its chemical composition and thickness makes petroleum jelly perfect for suffocating botflies.

Apply a generous amount on the affected area and wait for the parasite to die.

Once it does, you can carefully remove it using a pair of tweezers.

How to Remove a Tick from a Dog with Vaseline

Can I Use Vaseline for Ear Mites in Dogs?

This technique was brought to light when PBS aired a short video entitled “bacon therapy” as a remedy for botflies in 2015.

The video which is part of the NOVA program Gross Science uses your standard bacon grease to suffocate warbles.

When you cover the breathing hole with a generous amount of bacon grease, the flies will have no way of taking in some air. As a result, they will die.

Some people believe that using bacon grease works as it draws them out to feed on it.

However, this is not true according to one professor from the Michigan State University by the name of Dr. Rich Merrit.

“I believe that the sweet flavor and smoky taste of bacon don’t attract botfly larvae. The parasites don’t leave the dog’s skin and instead feed on the ‘new’ source of protein. Instead, the heavy grease has the same effect Vaseline has on parasites.” He said.

Duct tape can also help you safely get rid of botflies in your adorable pooch.

All you have to do is wrap the warble’s body (or any visible part) around the tape and leave it in for about 6 days.

After this time is elapsed, you can remove the tape along with the botfly.

It is a good idea to shave off the area around the swelling to reduce the pain in the dog.

Duct tape removes the oxygen supply and gets the deadly parasite hooked so it doesn’t look for another place to breathe from.

Here’s another ingenious trick to suffocate botflies before removing them easily.

Simply pour harmless glue such as office glue all over the area of infection.

Let it sit for a few hours or days and then use tweezers to remove it along with the dead Cuterebra.

Don’t forget to clean the wound area with isopropyl after removing the fly.

Finally, wash your hands thoroughly with a good antiseptic before handling anything else.

If you are fast enough, you can also pull the botfly right off your furbaby without having to drown it first.

The reason this is among the last techniques on this list is because it is the least recommended.

If you are not effective, you risk tearing the warble and leaving parts of its body inside your doggie.

Also, botflies have barbs that can hurt the dog as the fly leaves the body.

To be safe, use a pointed pair of tweezers that will do a fast and effective job in one swipe.

Be sure to disinfect the tweezers before using them for the safety of your doggie.

If you are up to the task, grab a pair of gloves and fine-tipped tweezers:

Botflies are not easy parasites to deal with. Anything can happen during removal and make the situation worse than before.

Going to the vet is the safest option here. A good vet will examine the dog and determine the extent of infection.

Depending on their findings, they will remove the fly manually or surgically then administer antibiotics to stop further infection.

Are you fed up with botflies creating a home in your dog’s skin?

You can implement several strategies to get rid of them.

No matter what you do, trade carefully.

You don’t want to puncture the parasite and leave parts of it in the dog’s insides.

That cannot be good. If you are unsure, always take the doggie to the vet.