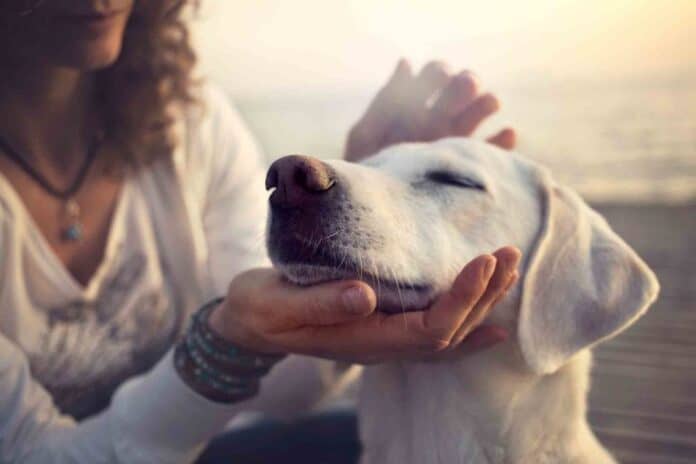 Dogs are considered to be one of the most intelligent animals on the planet. They can learn how to perform tricks, they can understand basic commands, and they can even figure out how to open doors!

But do dogs think we are just big dogs? Recent research has shown that dogs may actually understand that humans have different cognitive abilities than other animals.

What exactly is going on inside a dog’s head? It’s a question that has long puzzled dog owners and scientists alike.

Do they see us as members of their pack, or simply as strange two-legged creatures that provide them with food and shelter?

Recent studies have shed some light on this question, and the answer appears to be… both!

Dogs do seem to view humans as members of their social group, but they also appear to understand that we are not dogs.

A lot of research has been conducted on dog cognition, and there have been some fascinating findings.

For instance, dogs have been found to be able to understand human pointing gestures far better than any other animal tested (including our closest primate relatives).

This suggests that they see us as members of their own species, rather than just other animals.

But it’s not just our gestures that dogs understand. They also seem to be attuned to our emotions, and can even tell when we’re happy or sad just by looking at our faces.

This is likely because they’ve evolved to read our emotional cues in order to better understand us.

Scientists believe that the reason dogs are so good at understanding us is that they’ve been living side-by-side with humans for thousands of years.

During this time, they’ve slowly but surely developed an innate ability to read our cues and understand our behavior.

Here are some of the most interesting studies on dog cognition:

In a study published in the journal Animal Cognition, researchers found that dogs can understand human pointing gestures.

The study showed that dogs were more likely to follow a human’s pointing gesture if the person was looking at them, indicating that they understood that the gesture was meant for them.

Another study, published in the journal Science, found that dogs can understand what humans say better than any other animal.

In the study, dogs were able to learn new words by listening to their trainers. The dogs were also able to understand the meaning of words by using contextual cues, such as intonation and facial expressions.

According to a study published in the journal PLOS ONE, dogs are capable of understanding human emotions. In the study, dogs were shown pictures of people’s faces and asked to choose the one that matched the emotion being conveyed.

The dogs correctly chose the matching face more than half of the time, indicating that they understand human emotions.

A publication in the journal Applied Animal Behavior Science found that dogs are able to use humans as a resource when they’re faced with a difficult problem.

In the study, dogs were given a puzzle to solve and then given the option to ask a human for help.

The majority of dogs chose to ask humans for help, indicating that they understand that humans can be a valuable resource.

Another study, published in the journal Frontiers in Psychology, found that dogs are able to remember past events and use this information to make decisions in the present.

In the study, dogs were shown a series of pictures and then asked to choose between two options.

The pictures varied depending on whether or not they contained food. The dogs were more likely to choose the option with food if they had seen it before, indicating that they could remember past events and use this information to make decisions in the present.

These studies show that dogs are much smarter than we give them credit for. They are able to understand human language, emotions, and gestures.

They also use humans as a resource when they’re faced with a difficult problem.

And finally, they are able to remember past events and use this information to make decisions in the present.

Related Post: Will My Dog Forgive Me for Hitting Him?

Do Dogs Think Humans Are Parents?

Scientists are still trying to figure out all the nuances of dog cognition. One theory is that dogs see humans as members of their pack.

This makes sense from an evolutionary standpoint—dogs are descendants of wolves, who live in packs.

In a pack, there is a clear hierarchy, with an Alpha male and female at the top. The rest of the pack falls into a strict order below them.

Dogs likely view humans as being somewhere in this hierarchy—above them on some days, and below them on others. This would explain why dogs can be both submissive and aggressive towards humans depending on the situation.

Another theory is that dogs see humans as fellow dogs. This is supported by the fact that dogs will often try to engage in dog-like behaviors with humans, such as playing fetch or going for walks.

Dogs may also view humans as potential mates, which is why some male dogs will hump human legs!

So, what do dogs really think of us? The answer is probably a bit of both.

Dogs are complex creatures, and their relationship with humans is just as complicated.

But one thing is for sure: our furry friends love us unconditionally, and we love them right back.

Do Dogs Prefer Dogs Or Humans?

It’s a question that has long perplexed dog owners and scientists alike. But new research is beginning to shed some light on the subject.

A study published in the journal Animal Cognition found that dogs preferred interacting with humans over other dogs, even when those humans were strangers.

Researchers believe this preference is likely due to the fact that dogs are more reliant on humans than they are on other dogs. After all, we provide them with food, shelter, and love.

But it’s not just about what we can do for them. Dogs also seem to understand us in ways that other animals don’t. They can read our emotions, respond to our commands, and even remember things that we’ve told them.

So, it’s no wonder that they think of us as fellow dogs. We’re the ones who have earned their trust and love. And that’s something we can all bark about.

It is a well-known fact that dogs understand the world around them based on scent. This means that your dog sees you not just as a human, but as someone with a specific smell.

When you come home from work, your dog may be so excited to see you because not only do you have a familiar face, but also a familiar smell.

But scientists now believe that dogs are more connected to us than we may have thought.

Not only do the canines think of us the alpha members of their packs but they actually prefer spending time with us than with other dogs. This is mostly due to the fact that dogs rely on us for food and shelter.

In a way, you may say dogs think of us as dogs rather than as humans.

Related Post: What Do Dogs Think About When They Are Alone? 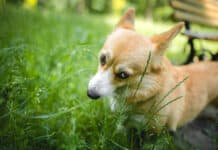