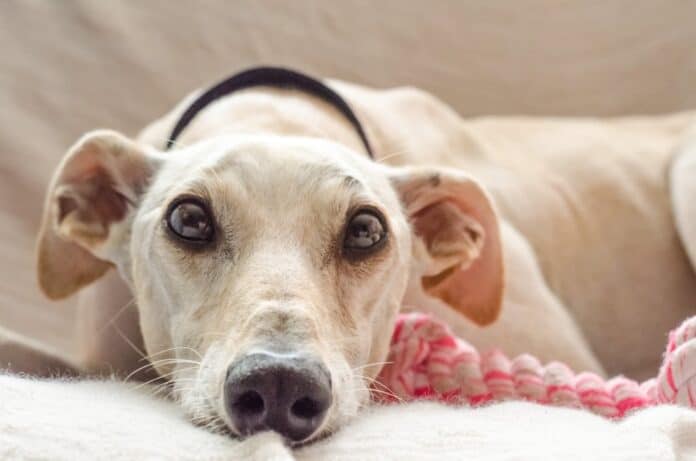 There are so many dog breeds, some of which have so many similarities, that it can be hard to identify them.

One of the easy ways of differentiating breeds is by the shape of their ears.

Ears are just as important to dogs as their noses. And contrary to common belief, dogs that have folded and rose ears hear just as good as those with pointed ones.

By any standard, the hearing ability of dogs is miles ahead of that of humans. A dog can hear even the high-pitched sounds that are typically outside the human auditory ability.

Additionally, dogs can hear sounds that are too soft to be picked up by the human ear.

Dogs can also hear sounds from quite a distance—they hear sounds that are almost four times farther away than what we can ordinarily hear.

In today’s post, we will have a look at the common dog breeds that have rose ears.

Rose ears refer to dog ears that stand upright and then fall on the side thereby giving them a distinctive rose-like appearance.

Without further ado, the following is a list of dog breeds with rose ears.

The Anatolian shepherd dog is arguably one of the most fascinating rose-eared breeds.

This dog breed dates back to 2000 BC and it has been used as a livestock guardian dog since then.

He does well as a livestock guardian dog because he is fierce and loves taking charge.

When fully grown, these dogs can be anything from 27-29 inches at the shoulder.

The dogs not only protect livestock but children, other dogs, and even the cat.

Anatolian Shepherds have V-shaped ears that that are triangular in shape and droop down slightly giving them the appearance of a rose flower.

Some countries allow ear and tail cropping but many more let the ears hang low.

The dog was originally used for herding livestock in the western United States especially during the gold rush era.

These dogs are excellent workers and are the happiest when they are busy doing something.

The ear breaks about a quarter way from the base to the top.

The Brazilian Terrier, also known as the Fox Paulistinha, is one of the two globally known breeds that are native to Brazil.

It is a relatively tall dog with short and tri-colored fur which is complemented by the rose ears.

You cannot miss the cute look of the velvety ears that are half-folded and V-shaped.

These dogs have a lot of energy and are always game for a run or some other activity.

Once they burn out their energy, they will happily sit with you for a quiet evening in the house.

There are many ways to describe the British bulldog. Perhaps the most common is the shape of the face.

As a brachycephalic breed, the face is flat and squished. Additionally, the breed’s rose ears that have a droop and fold over the front give the dog an edge as well.

Bulldogs are purebreds and are some of the most popular dog breeds in America.

You can easily find one in rescue groups and shelters.

One reason why they are loved is the ease with which they adapt to apartment life.

A brief walk is usually enough exercise for them and they will spend most of the day napping on the sofa.

As the name suggests, the Danish-Swedish Farmdog originates in Sweden and Denmark.

It historically lived on farms and was used as a rat catcher, guard dog, and different kinds of hunting.

The dog has a gentle temperament and would therefore make for a great pet.

In 2011, it was entered into the American Kennel Club Foundation Stock Services program (AKC FSS).

Danish-Swedish Farmdogs come with triangular droopy ears that flop forward in a manner that borders the face on either side.

The dog makes a good guard dog because he doesn’t trust strangers but remains docile to his owners.

You can still keep it as a pet for your family but it will require socializing training from when it’s a puppy because of its innate dominance qualities.

Apart from a hook at the end of the tail and a black mask, the breed also has adorable rose ears that hang on the side of the face.

Boxers are short-haired dog breeds that hail from Germany.

They have a couple of ear shapes but rose ears are pretty common.

They probably borrow the rose ear trait from their ancestors, the Bullenbeisser and the Old English Bulldog.

Boxers are not only loyal but are also very intelligent. They are always playful and silly but can be quite courageous.

They are both patient and protective and that makes them great family dogs as they are very good with children.

Boxers need to be exposed to other puppies and a lot of people when they are puppies for them to develop well.

They are streamlined for agility and they can easily do speeds of 40-45 miles per hour. For this reason, greyhounds are also good racing dogs.

Besides having lean, muscular physiques, these pups come with distinct ears which clasp the head to be aerodynamic.

The standard position of the ear is backward but the ears can pull many tricks. They can stand up, go out, and retreat to the back of the head.

Not all collies have rose ears. For instance, the Welsh Sheepdog and the Border Collie both have pointed ears.

However, the Rough Collies are rose-eared.

Collies originated from Scotland and it is believed the name is either derived from the black-faced mountain sheep of Scotland or from the root word coal.

This 50-70 pound dog is relatively easy to train and they can be very devoted to and protective of their family.

Collies are always playful and jolly and would therefore make excellent pets for families with kids.

The Papillon dog is a type of Spaniel and it’s also referred to as the Continental Toy Spaniel.

This is one of the oldest dog breeds in the Toy family and it is commonly portrayed in paintings that date back to the 16th century.

Some papillons have straight ears while others have rose ears.

The ones with rose ears are called phalenes which literally means moth in French.

Papillons are very friendly and even though some consider them lap dogs, they are actually very playful and active dogs.

If you are looking for a dog that will be content to lie on the couch all day, this is the wrong breed for you.

This is arguably the most confusing breed on our list of dogs with rose ears for two reasons.

Secondly, not all pitbulls have rose ears—some have pointy ones.

Some people usually crop the ears of their puppies and when they grow up, the ears will remain erect.

Pitbulls are known for their tenacity and are therefore very good in sports like agility, weight pulling, and obedience.

The Parson Russell is a terrier breed and just like the Brazilian terrier, it has rose ears too.

This dog came to the scenes in 1990 and it was named after Revered Jack Russell who is the one that bred it.

The Parson Russell breed is mostly white with patches of black or tan on the tail, neck, and ears.

Parson Russell terriers are bred to conform to show standards. For this reason, they have longer legs than their close cousin, the Jack Russell Terriers.

These dogs were originally bred for the extreme sport of fox hunting so they can be tenacious and strong-willed.

One of the first things that draw the eye to a Pumi dog is his rose ears. They are erect with the tip being folded over and pointing to the sides.

The ears, no doubt, add to the breed’s whimsical expression in more ways than one.

Pumi dogs originate from Hungary where they were used for herding sheep.

They are very good at driving, gathering, and keeping the stock in control.

The pug is known for its distinctive physical characteristics which include rose ears, wrinkly face, and a curled tail.

The ears are black, tiny, and folded.

The breed is believed to have originated from China but it became popular after being taken to Europe in the 16th century.

Pugs have an even-temple and a gentle spirit which explains why they are some of the most popular family pets.

Whippets are also known as Snap dogs or English Whippets.

These are sighthound breeds that originated from England and it is believed they are descendants of the greyhound breed.

Just like their ancestors, whippets are built for speed and are therefore great for dog sports like agility, dock diving, lure coursing, and flyball.

These dogs have upright rose-shaped ears that fall to the side resembling a rose flower.

When alert, the ears remain folded with a light curve on the sides.

There are two types of Shar-Pei dog breed—the meat-mouth which is considered a modern version and the more traditional bone-mouth Shar-Pei.

Both breeds originated from Southern China where they were kept as property guardians and watchdogs.

Shar-Peis are known to be aloof with strangers while at the same time very loyal to family.

There isn’t much information on how this dog was bred but it is speculated that it came from some types of guard dogs that were kept in the Han dynasty of China.

The Africanis dog is also referred to as Bantu dog, African dog Zulu dog, or the Hottentot hunting dog.

The dog is more popularly known as Africanis because it is more common in the southern parts of Africa.

The Africanis is considered a landrace that has limited human interference with its breeding.

This makes the dog unique but it makes each puppy very different from the others.

For instance, most Africanis have rose ears but it is not uncommon to find others that have fallen ears.

They also come in all color combinations including but not limited to brown, black and white, and brindle.

So, there you have it – these are the 17 common dog breeds with rose ears.

As we have seen, some breeds might have more than one type of ear.

Also, some are cropped by their owners when they are puppies, so they don’t develop rose ears when they grow up.

Consequently, don’t be surprised if you get puppies that are rose-eared when both of their parents aren’t.