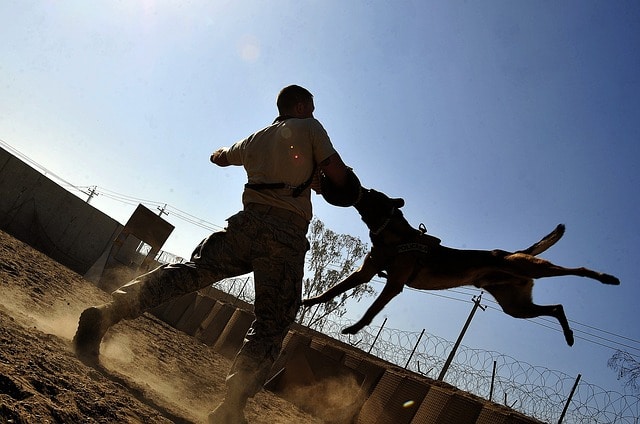 If you’ve ever been bitten by a dog, you know it’s not a pleasant experience. The pain can be debilitating not to mention the risk of contracting an infection.

Although rare, dog bites can actually be fatal.

While dog behavior is mainly a result of training and care rendered to him, it is quite obvious that some breeds tend to be more aggressive than others.

It is important to take this into account before choosing to bring a dog home, especially if you have young children.

As a guide, here are the top 12 dog breeds most likely to bite:

A Pit Bull is no doubt the most aggressive dog to walk the face of the earth.

Sure, the press and media have overstretched things a bit but this dog means business, most of the time.

Back in the day, this breed was developed for one main reason: fighting. No matter the size of the opponent, a Pit Bull cannot back down from a fight.

He’s also quite stubborn, powerful, and can easily deliver a crushing bite.

This dog doesn’t play when it comes to fighting. Killing a fully-grown adult is a piece of cake for him.

More than half of dog-related attacks in the US have actually been attributed to Pit Bulls.

As a matter of fact, this breed has been banned in a number of countries around the world.

A Rottweiler or “Rottweiler Butcher” is yet another breed that can easily bite if you cross his line.

To say that this breed is powerful would be an understatement. A Rottweiler can take down a Pit Bull and easily overpower him.

There are a few reports claiming that a Rottweiler once killed four people at once.

Fortunately, this breed is one of the most devoted and obedient dogs out there.

If you can get an expert to train and socialize him, he can be a sweet and charming pet ever.

Known for his beautiful coat, expressive face, and lengthy ears, the Cocker Spaniel is a popular American pet.

It is a little bundle of joy with roots in England dating as far back as the 14th century.

However, don’t let the cuteness and his young stature lie to you. When threatened, a Cocker Spaniel has no problem biting.

For one, he is very protective of his owners. If a stranger comes too close or makes certain moves that are borderline dangerous, this dog will jump at them and bite with zero warning.

Part of the reason for this behavior is the fact that he was bred as a gun dog in England. It is nonetheless quite dangerous.

Tosa Inus are not banned in Malaysia, the UK, New Zealand, and other countries for nothing.

These large dogs have claimed the lives of many people over the years and continue to do so.

Essentially, TosaInus originated from Japan, where they were primarily fighting dogs. This trait has since gone down as the dogs were turned into pets.

However, when pushed to the limit, they can pounce on you and tear you into pieces in minutes.

The good thing is that this breed is friendly towards human beings.

When it comes to other dogs, that’s a story for another day!

A German shepherd is an original watchdog. It is only befitting for him to know how to protect his owners and enemies the best way he can.

As statistics would have it, this breed accounts for 3.8% of total dog bite fatalities in the United States.

So, yes, German shepherds take their role of protection seriously.

They are huge, highly intelligent, and very protective of their owners.

When a stranger enters their territory, these dogs are likely to retaliate by biting.

From face value, the Bullmastiff shows no sign of attacking anyone. This is because he is a very well-behaved and charming dog most of the time.

On the flip side, he is also quite a hard breed to predict. One minute he will be all over you giving you plenty of love and the next, growling and biting your dress.

Bullmastiffs tend to get angry in a whim. When they do, there’s no time to talk about issues. They will resort to violence rather quickly.

This unpredictable behavior is what makes them hard to have around children.

Furry, sweet, jumpy, snuggly, beautiful… these are some of the things that come to mind when you think of a Chi.

Just looking at one makes you want to rub your hands through his thick coat and take him home with you.

However, you might want to reconsider your decision if you have kids. Biting and growling is the norm for this breed.

Fortunately, a bite from a 5-pound dog such as a Chi does little harm most of the time. It can be painful but not lethal.

For obvious reasons, Chihuahuas love to bite on young kids but they can also do the same for a fully grown adult.

With a bite force of 228 psi, you bet a Doberman doesn’t play when it comes to biting.

See, this dog is fiercely loyal. Regardless of who you are, you will have to go through him before endangering his owners.

To think that you can be content with 60 pounds of body weight along with powerful jaws would be a big mistake on your part.

The American bulldog is also among the list of dogs most likely to bite.

Granted, he has an easygoing and calm attitude most days.

His favorite activity is snoozing and just being a couch potato.

However, when he senses danger, he will take action immediately.

Just so you know, a bulldog can exert up to 300 psi when biting, so yeah, this dog is pretty ferocious.

The Cane Corso is smart, muscular, powerful, and protective. This is, for the most part, the perfect recipe for an aggressive canine.

What makes a Cane Corso even fiercer is the fact that it has a bite force of 700 psi. This makes him the number one dog on the “strongest bite” list.

Let’s just say that when this dog locks his jaws on your flesh, count yourself lucky if you live to see another day.

What Is It Like To Own A Cane Corso And Presa Canario Mix?

Just one glance at a husky and you will know danger is imminent.

No doubt these dogs are born working dogs originally used to pull sleds.

As a result, they are fast and can endure long hours of hard work.

When their safety or that of their owners is compromised, they don’t waste time before sinking their teeth into the flesh of the enemy.

And yes, their bite is so strong that they can kill if they want to.

A chow-chow is a Chinese lap dog with a fantastic personality.

This teddy-bear-looking canine is also well-behaved and insanely cute.

The only problem is that it is quite protective of his owners and standoffish towards strangers.

He tends to be aggressive at even the most well-meaning stranger going as far as biting them.

That’s it with the list of dog breeds that are most likely to bite.

If you do choose one of these, be sure to have him trained by the experts.