Home Tips & Tricks Dog Acts Like Something Is Stuck In Throat: What Does It Mean... 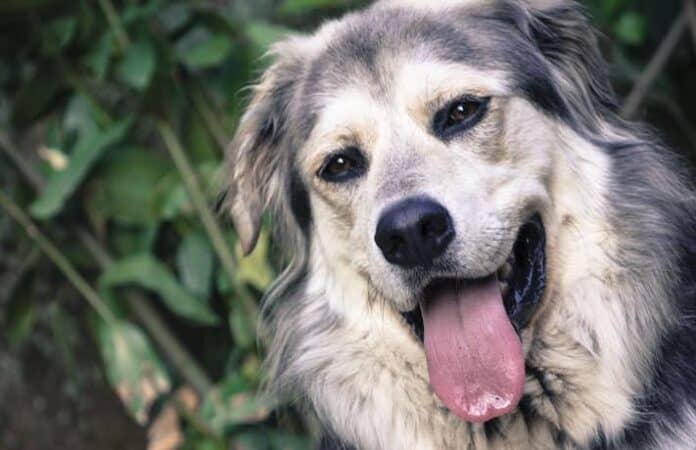 A keen pet parent will always know when their pooch is not alright.

You can tell if your dog has a mild tummy upset, injury, or disease just by observing him.

When your doggie acts like something is stuck on the throat, you will naturally be alarmed.

He cannot just cough and gag for no reason at all. If the pooch shows other bothersome symptoms, your worry will be multiplied thousand times over.

From having a foreign substance stuck in the throat to viral and bacterial infections, there are plenty of reasons to make a dog act this way.

Since you are not an expert, it may be difficult to tell one from the other.

Don’t worry—we are here to help. We have explained the possible causes of a dog coughing accompanied by an attempt to get rid of something stuck on the throat.

We have also described what to do for each scenario.

1. A Foreign Body Is Lodged In The Throat

Dogs are curious animals. They explore their worlds mostly through their mouths.

From time to time, they ingest sharp or large substances that can get stuck in the throat.

Small items can equally get lodged in the canine gullet. Normal foods and drinks can get stuck in the laryngeal area of the nasal cavity causing irritation and inflammation.

To try and remove it, your doggie will cough, gag, scratch the throat, and act disturbed.

A dog that has an obstruction will display many symptoms including drooling, fever, lip licking, depression, anorexia, and salivation.

The symptoms will depend on the size of the object, where it is present, and how long it’s been there.

It is pretty difficult to tell if your pet has something in his throat. You will have to take him to the vet for a proper diagnosis.

They will carry out a thorough physical exam to diagnose the root of the problem.

Sometimes, diagnostic imaging is necessary to rule out other causes of persistent coughing.

For this specific problem, an endoscopic exam will confirm the presence (or absence) of a foreign body in the throat.

An endoscope (the instrument used for the procedure) offers real-time visualization of the dog’s larynx and throat. It also has an attachment used to remove the alien object.

A serious case of obstruction, choking is where a foreign object is blocking oxygen supply.

This one can become fatal fast. Your baby can easily turn blue and pass out.

You can tell your dog is choking if he’s in extreme distress.

Look out for drooling (lots of it), rubbing his face on the ground, retching, pawing, making choking sounds, breathing difficulties, and blue skin.

Time is of the essence for a choking dog. Before you call the vet, you may want to perform the Heimlich maneuver.

This is where you make a fist and place your hand behind your dog’s ribcage.

Exert some force and push your hand up and forward.

If you have a small dog, don’t use too much pressure. You might crush the poor guy.

Now you can rush to the vet.

The Heimlich maneuver is not easy to do especially when you are panicking. Only attempt if you can stay calm. Else, hurry towards the vet’s clinic.

Sore throat is a common occurrence among humans. We have gotten used to it that most of us no longer go to the doctor when it attacks.

Turns out our pups can also have infections in their throats. They have tonsils as well and can suffer tonsillitis occasionally.

Thankfully, these two infections are rare in the canine world.

Sore and tonsillitis are mostly brought out by other viral infections such as kennel cough, periodontal disease, canine flu, and strep throat.

Dogs with a sore throat may not necessarily refuse food. However, because of the pain in the throat, swallowing will prove uncomfortable.

Besides coughing, other symptoms of the condition include an inflamed throat, excessive drooling, and fever.

Just like in the case of human beings, sore throat and tonsillitis in dogs aren’t severe.

There are plenty of antibiotics prescribed for the problem. Herbal teas with peppermint, thyme, and sage are also effective. The pup should recover within a few days.

With that said, severe cases can obstruct the upper airway. This occurs if there’s inflammation and abscesses.

If the airway is blocked long enough, your dog may collapse. In this case, doing a proper diagnosis is important to identify the cause of the inflammation.

If there’s an abundance of abscesses, the vet may need to drain them first.

In case a foreign object is the cause, this will need to be removed. Anti-inflammatory treatments may be recommended if the throat is severely inflamed.

Another reason your dog acts like something is stuck in his throat is because he has a viral or bacterial infection.

The common ones include the following.

Also called Bordetella, Kennel cough is a canine infection brought about by the bacterium, the Bordetella bronchiseptica m.

It makes a dog cough as though he is choking on something.

Your pet can catch kennel cough when he inhales air particles with the said bacteria.

The microorganisms weaken the mucus coating of the respiratory tract. The result is an inflamed larynx and trachea.

Parainfluenza is a deadly respiratory virus affecting the trachea. Its symptoms present like those of canine influenza but the two infections are different.

The virus is common in places with many dogs. It is highly contagious with senior dogs and puppies being the biggest victims.

Even after the infection has healed, your dog can pick up the virus for up to two weeks.

Symptoms include a dry or moist cough, weakness, loss of appetite, nasal discharge, and low-grade fever.

When you see your dog struggling with a persistent and forceful cough, seek medical treatment.

While the infection is not very severe, it is very contagious.

If you have other dogs at home, you risk making them sick if your fail to act fast.

The vet should be able to recommend the best antibiotics for both the kennel cough and parainfluenza. These specifically target the Bordetella bacteria and other respiratory viruses.

Most dogs with bacterial and viral infections recover within 3 weeks. However, the healing process may take longer for older pups or those with existing medical conditions.

Reverse sneezing is yet another common respiratory illness in dogs – especially miniature breeds.

It is triggered by the inflammation or irritation of the pharyngeal, nasal, and sinus passages.

This type of event is characterized by sudden, rapid, and simultaneous inhalations followed by gagging and/or snorting sounds. The sight is quite scary and alarming.

A dog that is reverse sneezing does so to get rid of an allergen or foreign particle from his airway. This can be dust, powder, or other allergens lodged in his throat.

Thankfully, this condition is not harmful unless the dog has underlying medical conditions.

Most doggies go back to normal after one sneezing episode.

The best remedy is to close the dog’s nostrils using your hand for a second.

Also, massage his throat gently to try and calm him and get him outside to a place with fresh air.

You want to verbally calm him throughout the process as well. Some vets recommend antihistamines but it is not necessary for all situations.

Does your dog act like something is stuck in his throat?

Don’t panic. Relax, and take a look at his symptoms.

Now call the vet and explain them correctly. Follow his advice to the letter and your dog will be fine.

Related Post: Why Is My Dog Dry Heaving And Eating Grass?