Home Tips & Tricks Can I Use Vaseline for Ear Mites in Dogs? 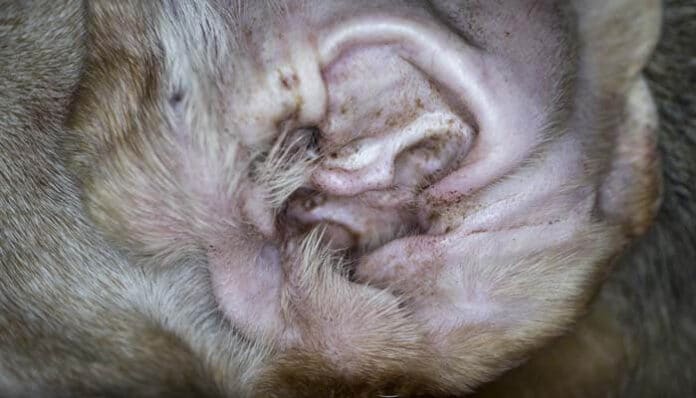 If your adorable dog is constantly shaking her head and scratching her ears more often than not, chances are she has ear mites in her ear canals.

These tiny organisms can do a lot of harm to your pet. They cause discomfort and itchiness around the ear.

To ease the itchiness, your dog will shake and scratch herself silly. Sadly, she can scratch to the point of rupturing her skin thereby causing a wound.

An open wound can cause an infection, which is something to worry about. Plus, ear mites spread like wildfire. They can easily transfer from your dog to the family cat and finally to the human members of your household.

In short, ear mites must be dealt with before they wreak havoc.

There are several ways of getting rid of them from your pet. One of the infamous techniques is using Vaseline.

Some people swear by it but does it really work? We investigate…

What Are Ear Mites?

Also called Otodectescynotis, ear mites are tiny parasites that reside in the ear canal of canines. Occasionally, they can live on your pet’s skin as well.

The ear mites have eight legs and belong to one family as other arachnids like spiders and ticks.

They are only smaller and barely visible to the human eye.

Fortunately, they are easier to treat.

Mites also survive for a small period of time in the host, unlike flea pupae that can survive for months without food intake.

While they love putting up shop in dogs, they don’t mind making a home in your cat and other small furry animals too.

The reason they love the ear canal is that they feed on earwax and skin fat.

The arachnids don’t burrow under the skin like ticks and fleas. This makes them less harmful and relatively easy to get rid of.

The danger, though, is that they are super contagious. When the infected animal comes in contact with an animal or human being, the mites will be easily transported.

Ear mites cause plenty of itching in your dog. Apart from scratching the ears and shaking the head, you will notice brown secretions that look like ground coffee in your dog’s ear.

These are clumps of dried blood found in the ear canal. The secretions are often accompanied by a foul odor.

Your pet’s ear may also appear red and inflamed. For dogs with allergies, ear mites can cause further misery.

Can You Use Vaseline To Treat Ear Mites?

One of the best homemade solutions for ear mites is oil treatment. This means applying oil to the dog’s ear to suffocate the ear mites.

Coconut, mineral, baby, and olive oils work the best but you can also use Vaseline as well.

In other words, if you don’t have the rest of the recommended oils, you can use Vaseline. This petroleum-based jelly is not toxic to dogs as long as it is applied externally.

To use it, drop a generous amount of the jelly in a cotton ball then apply it to the inner part of your dogs.

Let the entire canal fill with Vaseline to soften the discharge.

Leave it on for a few hours to let the jelly works its magic of smothering the ear mites.

Now, wipe off the jelly with another cotton ball or piece of cloth.

Clean the ear further with hydrogen peroxide of vinegar dipped in a cotton ball.

Keep wiping until you are sure the ear is thoroughly clean.

Do this daily until the symptoms disappear.

Like other oils, Vaseline works great for removing ear mites as it suffocates them. It has a thick covering that mites cannot escape.

Once they are trapped in the jelly, they will be smothered. With no way of escape to breathe, they will just die.

Additionally, Vaseline is a natural antibiotic and antiseptic according to UCI Health experts.

Apart from suffocating mites, it also has the power to stop inflammation and swelling.

For a dog that won’t stop scratching her ear and shaking her head, a product with all these benefits is a breath of fresh air.

Things to Keep In Mind

While Vaseline is not toxic to your pet, it should be kept as a topical ointment. It should not find its way to your doggie’s tummy.

After all, it is a petroleum product, which means it has ingredients that may upset your dog’s tummy. These include natural waxes and mineral oils.

Unfortunately, dogs love to lick everything that looks attractive in their bodies including Vaseline lodged in their ears. This is true if the Vaseline comes with extra flavor. The dog may find it yummy and will lick all of it from the ear.

Lucky for you, she will have to eat a huge amount of jelly to have digestive issues. Since it has a soft texture, it is less likely for it to cause blockages of any kind.

What’s more, there are several strategies that you can leverage to prevent your pup from licking Vaseline on his body. Learn more here: How to Stop a Dog from Licking his Wound without using a Collar

All in all, always remember that Vaseline is made for topical use only. That means that if the dog already has sores and wounds from scratching herself repeatedly, avoid using jelly. There are other products in the market you can utilize in such a situation.

Ear mites are among the worst canine enemies.

When all you have at home is a jar of Vaseline, feel free to use that to get rid of the nasty creatures.

Just ensure the ears don’t have wounds or open sores. Also, find a way to keep your dog from licking all the jelly from his ears.

Why is My Dog Shaking Head after Ear Plucking?