Home FAQs Why Did My Dog Only Have One Puppy? 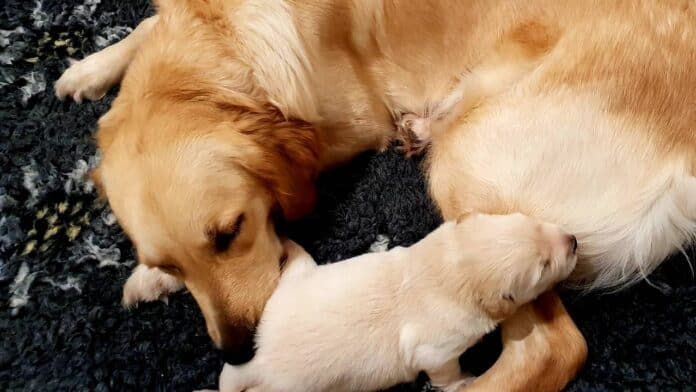 Dogs are polytocous species, which simply means that they give birth to multiple offspring at the same time.

Miniature and tiny breeds, on average, produce 3-4 puppies in one litter while large and giant breeds can have 7-15 puppies.

Tia, a Neopolitan Mastiff, gave birth to a whopping 24 puppies back in 2004 setting a Guinness World Record.

Knowing all these, it can be stressful when your dog gives birth to only one puppy, also knows as a singleton.

What Causes A Dog To Give Birth To One Puppy?

A dog is designed to release more than one egg for fertilization during breeding. Sometimes, things don’t pan out that way.

What are the reasons for singleton puppies?

Breed is the number one factor influencing the size of the litter.

This is why Pomeranians, Chihuahuas, and Japanese Fritzes don’t go beyond four puppies in one litter.

On the flip side, German Shepherds, Cane Corsos, and Labrador retrievers range from 8-10 puppies.

Because of their size, small and toy breeds are victims of singleton puppies. Scottish terriers are especially notorious for this.

Unlike human beings whose fertility dies off after a certain age, dogs remain fertile until they die.

However, their fertility takes a dip after ages 5-7. This is why the best breeding period for a dam is 2-5 years old.

As she passes the 5-year old mark, the size of her litter will start to decrease.

While we are still at the subject of age, very young dogs generally have smaller litters, especially the first litter.

As she gets acquainted with mothering, her litter size will grow gradually.

Related Post: How to Get More Female Puppies in a Litter

3. The Health Of The Dam

The health of the dam is also directly proportional to the size of her liter.

A dam with poor health may give birth to one or two puppies as her body is not in a position to sustain more of them.

Genetic factors also heavily influence the number of puppies in a litter.

Unfortunately, it is very hard to predict if a dam’s genes will cause her to give birth to one puppy or not.

But if it happens twice in a row, it is clear that she is designed to be a mother of singletons.

While breeders resort to inbreeding as an effective tool for producing high-quality specimens in a consistent way, it can be a surefire way of passing deleterious alleles and embedding a wide range of health issues.

For instance, it is believed that the more inbred a litter is, the smaller the puppy count is likely to be.

The Dangers Of One Puppy (Singletons)

Giving birth to one puppy may seem harmless but the opposite is actually true. Both mom and her puppy need plenty of help in such a situation. Here is why.

Ideally, birth is triggered by hormones produced by all the fetuses in the dam’s uterus.

When there’s only one fetus, the hormone released may not be sufficient to stimulate the birthing process.

This causes the fetus to die in the womb. Sometimes the cervix may only open partially, letting micro-organisms into the uterus and causing the fetus inside the womb to rot.

That’s why it is highly advisable to do an x-ray or ultrasound early enough (55-58 days) to establish your dam’s puppy count.

In case the dam failed to start labor because of insufficient whelping hormones, her maternal instincts may be interfered with, especially if it is her first time giving birth.

Even worse, if she delivered her puppy through C-section, she may fail to recognize the puppy as hers, which often leads to rejection of the puppy.

Once in a while, a dam can give birth to one puppy on her own but even then danger is never far away.

See, littermates stick close to each other as a way of staying warm.

With no sisters and brothers to cuddle with, the puppy may be too cold to feed.

Cold kills puppies fast. Thankfully, there are many options you can take to warm up the puppy, including the use of heated blankets.

Again with no littermates to play with, bite, and learn from, a puppy is bound to have issues in the future.

For one, they have no way of learning how to co-exist with others.

After all, there is no one to scramble for food with, push and shove to get mom’s attention, and interrupt.

This can cause the dog to have behavioral issues like aggression when they grow up.

As a group of puppies plays, they engage their claws and teeth a lot. They love chewing on their brothers and sisters and in the process, they develop muscle control and biting.

Without mates to chew on and bite, the singleton may use you instead. Puppy teeth and claws can be sharp and overbearing.

Right from the womb, singleton puppies are larger than their counterparts. They get all the nutrition from mommy.

After they are born, the entire mother’s milk which would normally be shared among 5 or more puppies belongs to the one puppy only.

As a result, they can easily gain weight fast impairing their walking and running.

Fortunately, they will burn off the excess once they learn to be on their feet.

Related Post: How Much Weight Should A Puppy Gain Per Week?

Another common issue with singletons is training.

When you are used to special treatments, you will always feel entitled to certain things unless something intrudes.

It takes a special kind of training to recognize and cater to all the needs of a singleton as far as training is concerned.

And we are not talking about simple training like obedience or housebreaking types of training.

We are talking about serious forms of training like agility, tracking, commands etc.

There are high chances that a singleton will quit and walk away if you don’t do things correctly or in a way that favors him.

Now that you have a singleton puppy, realize that the stakes are high.

First, you want to make sure the puppy spends time with other mates of the same age.

If you can get other newborns to cuddle with, go for it. It will provide a conducive environment for your singleton to interact freely with other puppies of his or her age.

Otherwise, use toys that mimic littermates. This will solve most of the issues surrounding these special puppies.

Once they turn a decent age, start training and socializing them further.

Alternatively, consider enrolling your fur baby in a puppy kindergarten. This can help him or her learn the basics of canine body language.

But if you absolutely can’t adopt any of the above strategies, consider spending more time with your puppy.

Keep him clean, ensure that he gets enough warmth, and generally care for him the way his mom would.

Pick him up, snuggle with him, and let him get used to a lot of handling and physical contact.

In the presence of his littermates, a puppy doesn’t always get whatever he wants.

This is a good thing according to canine experts because it helps a puppy learn how to deal with frustration.

To ensure that your puppy learns self-control, therefore, don’t attend to your puppy every time he whines.

On the contrary, only give attention to him when he calms down.

Dogs are made to give birth to two or more puppies in one litter.

However, some don’t play by the rules for any of the reasons discussed here.

If your dog gives birth to only one pup, don’t panic; try your best to socialize the puppy by having her interact with her peers of the same age.

How Many Times Should You AI a Dog?